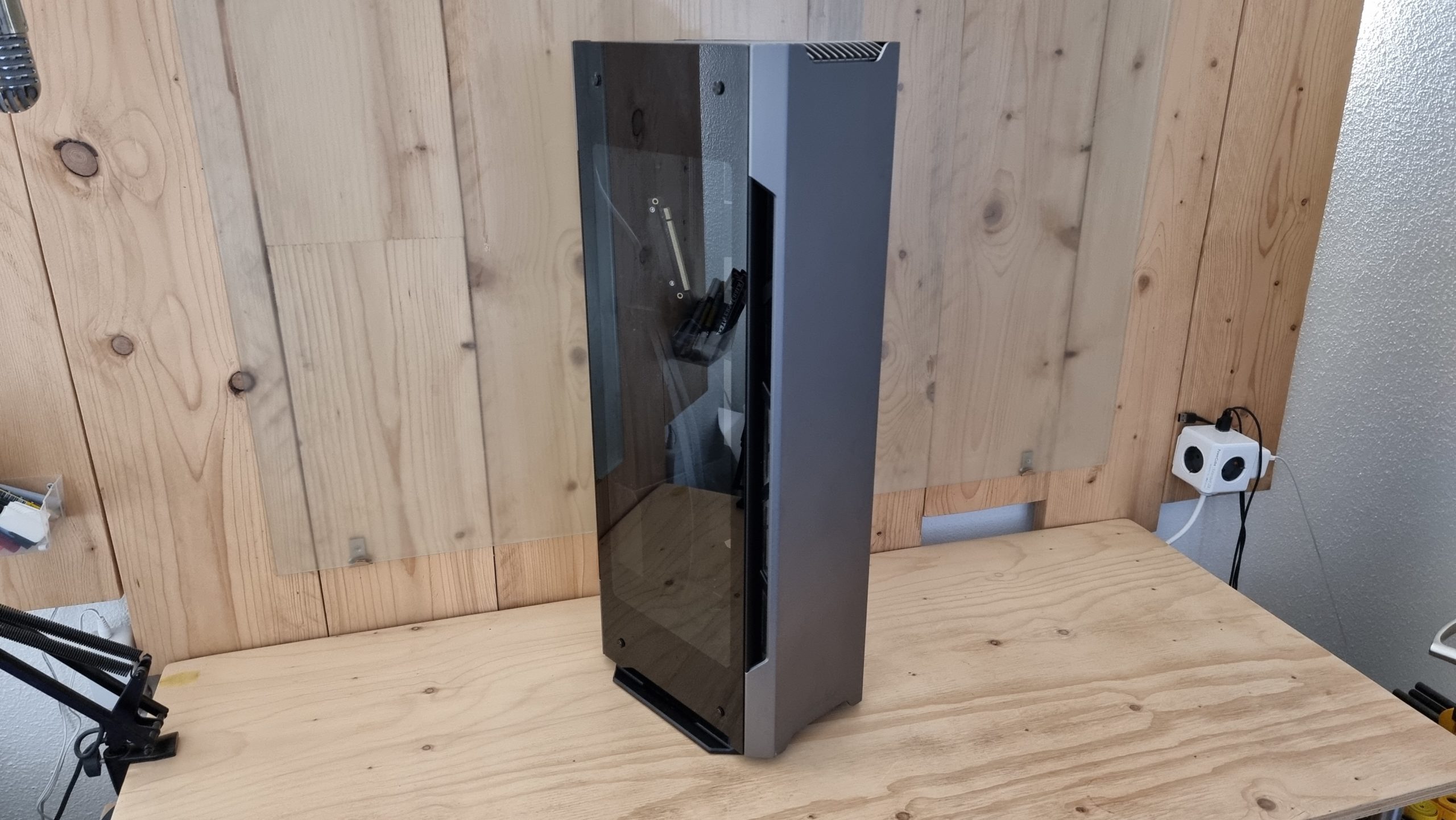 It is a challenging build to do because of various concerns. Airflow, component choices, and cable management being a few. It doesn’t require an SFX power supply, but I recommend airflow from the bottom. You also need a mini-ITX motherboard which usually is more expensive and has a minimal upgrade path.

Though the Phanteks Evolv Shift X’s frame might be tall and quite open, it is quite the glass sandwich. Unfortunately, this means you cannot chuck in just any cooler. Unless leaving out one of the glass panels or suffocating your CPU sounds like a good plan.

Why not throw in an AIO liquid cooler?

With the airflow challenges apparent, I want to make it just that bit harder for myself. I really want to make it an air-cooled build. My reasoning is based on reliability. I have a spare 240mm AIO lying around. But I cannot install it in the Phanteks Evolv Shift X without installing it badly with the pump above the radiator and the hoses on the top. This is about the worst way for an AIO to be installed because water will naturally go to the highest point in the system. Thus, probably destroying the pump sooner rather than later.

But this is why I choose reliable air cooling, even though it makes airflow even more critical. Sadly the BeQuiet Pure Rock 2, which has been in my current HTPC for about two years now, is way too large for this case. So this it’ll have to be replaced.

The video card I have planned for this build isn’t perfect for this build either. Blower-style coolers are the preferred solutions for this type of mostly glass case. This means the Phanteks Evolv Shift X’s airflow needs to be even better.

I need to test the best setup for the fans; now, I think I’m going with a positive airflow setup and treat the bottom and top part of the case as different airflow zones. In theory, this fits my use-case best, with this case being in the living room with 2 dogs.

Just about every part of the case has filtered intakes and meaning with a little bit of maintenance, I can keep dog fur out of the setup. Convection and the push from the bottom fan will expel heat out of the top of the case. The cross-stream from the front fan will provide extra airflow to the components and then crash mostly up the back part of the case and move up with the bottom airflow.

I consider it mainly two airflow zones due to the divider in the middle of the case, being the motherboard tray. Because of this, I think an exhaust fan in the top would not be as beneficial as another intake. But I might be mistaken.

SFF cases can be pretty, but they really need more planning than your run-of-the-mill ATX case to conclude this planning post. So if you do not like a challenge, then a point like the Phanteks Evolv Shift X really isn’t for you. But then again, if it isn’t a challenge, why would you even do it?

In the next blog post, I’ll share the parts list of this build and the expected bill of materials if you want to create this exact build with new parts.

If you have any questions or suggestions, please leave them in the comments below. 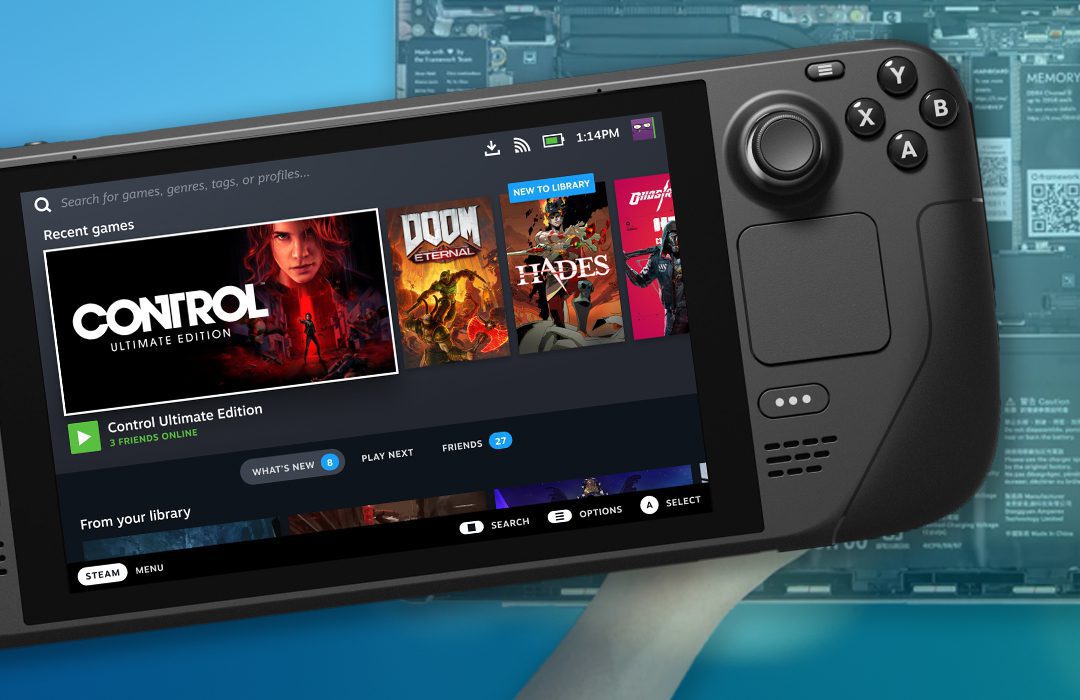 Why I am getting a Steam Deck

I’ve been a gamer for a very long time, and I remember playing games on computers when I was very young. Being born in 1984 I’ve seen quite a few big movements and played on a lot of systems. The Commodore 64, Atari Lynx, Nintendo Gameboy, NES, SNES, Playstation, every Xbox, except for the Series S and X. But the platform I always get back to is the PC, enter the Steam Deck.

Consoles are fun, simple machines to work with. But honestly, they’re way too simple in every way. This means their usefulness is very limited. The Steam Deck on the other hand can have a second life right when you are done with gaming or when it cannot game anymore.

Since the Steam Deck is a serious PC at nearly pocket size and seeing how long PCs can fulfill a lot of tasks even when they are 10 to 15 years old, it’s insane.

Yes, a console generation will last about 7 years. But after that. The machine is definitely nearly useless. New games won’t get made for it and it cannot do anything else. The Steam Deck is a modern PC that when combined with a USB-C dock can work perfectly playing, by that time, older games, play high definition content, and provide a work platform for simple tasks like E-mail, image, and text editing. You can even learn to program on it.

Your Xbox, Nintendo, and Playstation system are doomed to be e-waste and in the best case be recycled. Whereas the Steam Deck can be re-used.

The world dumbed down enough

I know people that cannot troubleshoot a hammer if their life depended on it, sadly I am not even being hyperbolic.

They are used to things being so dumbed down that they hardly think anymore. Being able to troubleshoot is a very valuable skill. And I know, I’m going to have to troubleshoot this machine at least a few times. Especially later in its lifespan.

I think I made this point and I want to bring it back to the wastefulness point in the tangent below.

Not too long ago I bought Mac(Books) from the early ’10’s to fix, upgrade and flip them for a profit as a hobby. Apple users are great for this because they don’t know how to troubleshoot anything. Their Mac will have a small defect, they’ll go to the Apple store and they’ll say it’s broken and not worth it to repair it. The standard answer for anything Apple that isn’t perfect.

The broken item will go to Apple, they’ll say they will give a discount if you leave it with them and they’ll flip it so refurbishment companies at a huge profit.

Apple didn’t like that and since 2013 they started to put in SSD’s with a proprietary connector. Which wasn’t much more than a larger than standard and remapped NVMe. Seriously, F*** you Apple.

Due to size constraints, they sadly couldn’t do it with the APU and RAM. So the device definitely isn’t perfect. But at least there is something.

And yes, this means issues might arise. But it also means it might be fixable. Like by pulling out the storage, fixing it on a normal PC, and putting it back in the Steam Deck.

I am no much of a Linux user, but I do like alternatives to Microsoft’s steaming pile of garbage. macOS is no alternative as the hardware (and soon software) is about as open as a prison-yard, you can make calls, play simple games with the other inmates and be creative. So it’ll do the job but you are behind bars and there is no mistake about it.

Linux on the other hand might give you too many options. So many that you will have to think and like I said before I think that is a good thing.

What it will also do is pull the gaming card out of Microsoft Windows’ hands. It has been there way too long and it cripples development. Because Windows, although I think it’s the best option right now (with MacOS being a prison and all) that will probably change when Windows changes leadership.

Life has been in lockdown long enough, but soft- and hardware is being clamped down on by the big guys. Google, Apple, Microsoft and Apple aren’t the good guys. They aren’t here to make your life better. They try to capture your life and through there your data.

Make no mistake, Valve does too. But at least they aren’t as big as those other monsters but they are strong enough to crack the prison wall a little bit.

Anyway, this blog post has been ranty and long enough. Hopefully, you get why I’m going to get the Steam Deck.

If you have any questions, leave them in the comments and I’ll respond ASAP.